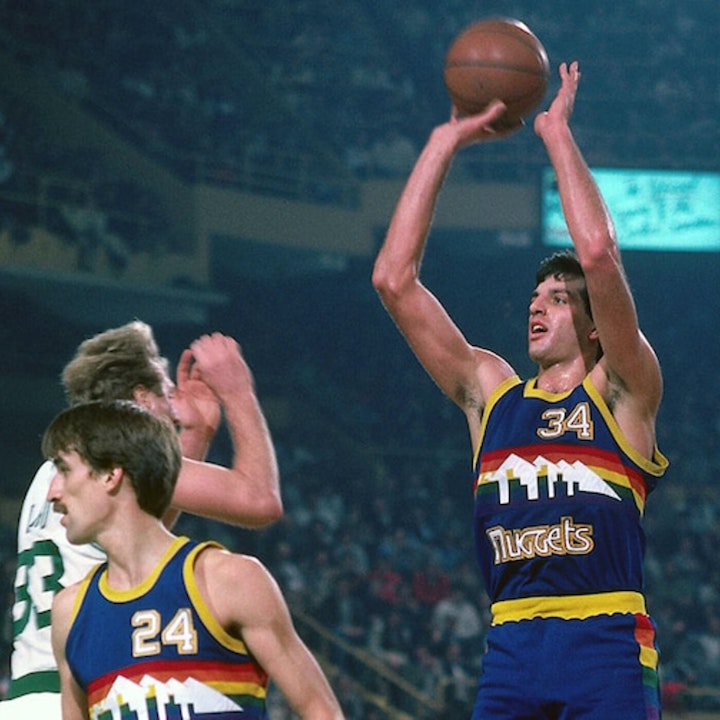 The longest-tenured Syracuse University player in NBA history, Danny Schayes, reminisces about his unique life in basketball. Why makes it unique? His father, Dolph Schayes (RIP), was one of the NBA's pioneering stars. Dolph, a 12-time All-Star and 1955 NBA Champion (Syracuse Nationals), was the NBA's all-time leading scorer (19,249 points) when he retired in 1964. Dolph was the first coach of the (1971) Buffalo Braves (now known as the L.A. Clippers). A pre-teen Danny, was a Braves ball-boy. He talks fondly of that year and his interactions with greats of the game. Dolph was enshrined into the Basketball Hall of Fame in 1973.

In 1975, Danny Schayes led his high school, the Jamesville-DeWitt Red Rams, to the Seneca Division crown and OHSL Northern Conference title (scoring 29 points in the final). Countless universities would covet Danny's signature. We talk about the recruiting process and why he ultimately chose to play for the Syracuse Orangemen. As a senior, Danny had a terrific individual season. He led Syracuse in scoring, rebounding and blocks (14.6 points, 8.3 rebounds and 2.2 blocks per game). The team went 22-12 and were 1981 Big East Tournament Champions, following a triple-overtime win (83-80) versus Villanova.

In April of 1981, Schayes was named to the Aloha Classic All-Tournament Team. He talks about the importance of that week in Hawaii and its positive impact on his opportunity to play professionally. Danny was ultimately selected by the Utah Jazz as the 13th-overall pick in the 1981 NBA Draft.

As a rookie, Danny played all 82 games. He scored in double figures 30 times (twice netting a season-high 22 points). After starting the opening 50 games of the 1983 season with Utah, Danny was traded to the Denver Nuggets. He shares funny stories about how the trade went down and his not-so-perfect adjustment to living in the Mile High City. Joining the Nuggets in 1983, Danny played seven-full seasons in Denver, averaging almost 10 points and six rebounds per game.

Among the many topics we cover, Danny recounts his memories of the classic, three-overtime game against the Detroit Pistons (Dec, 1983) and his unusual encounter / fracas with the L.A. Lakers' Magic Johnson and Kareem Abdul-Jabbar (1985 Western Conference Finals).

Danny was traded to Milwaukee in August, 1990. He played three-full seasons with the Bucks. Their best season - as a team - was 1991. They went 48-34, before losing to Philadelphia in round one of the 1991 NBA Playoffs.

Danny played 23 games with Milwaukee in the 1994 season, before he was moved to the L.A. Lakers. He had a 13-game run in Los Angeles to close out the regular season. In a majority of those games, his coach was none other than Magic Johnson.

In early July, 1994, Schayes was released by the Lakers. In October, he signed as a free agent with the Phoenix Suns. He played 79 games with Phoenix - including the playoffs - advancing to the Western Conference semifinals, before losing to Houston in seven games.

Mid-December, 1995, Danny signed a contract for rest of the season with the Miami Heat. He played 34 games with Miami - two of which were in the first round of the 1996 NBA Playoffs against Michael Jordan’s Chicago Bulls.

He was released by the Heat in July, 1996. About three months later, Schayes signed as free agent with Orlando. He played with the Magic for three seasons, making the playoffs twice. We chat about his run in Orlando, which ultimately would be his final stop in the league after 18 seasons.