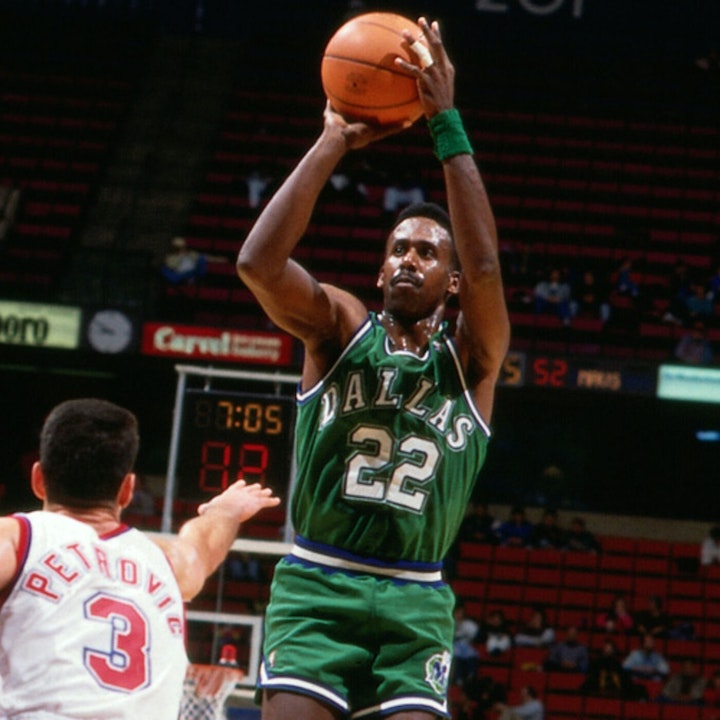 Kansas State legend and four-time NBA All-Star, Rolando Blackman. As a young boy, Rolando moved from Panama to New York. We discuss his successful transition to a new country and how he managed to learn - then master - a second language, all from just the age of eight.

To this point, Rolando's sporting love was football (soccer). After two years of struggling to find others who shared his love of the game, he began to take an interest in basketball, courtesy of his soon-to-be mentor, Ted Gustus. What followed was a transformation from "a kid who couldn't play...a kid who was throwing the ball away", to being named one of the city's top high-school players. Perseverance, passion and focus was paramount. Three times (seventh, eighth and ninth grade) Blackman was cut from his high-school team, before making his breakthrough and fast becoming one of the state's finest players.

We chat about Rolando's decision to attend Kansas State University. He had upwards of 200 offers from schools across the country. For three of his four college seasons, Rolando was teammates with friend of the show, Ed Nealy. As a junior, the Wildcats made it to the NCAA Tournament, before bowing out (second round) with a two-point loss to eventual champions, the Louisville Cardinals. Individually, Blackman had a fantastic season, being named Big 8 (now Big 12) Player of the Year and 3rd-Team All-American.

Following his junior season, Rolando was invited to the Olympic trials (May, 1980) in Kentucky. Upwards of 50 nations - USA included - boycotted the (July) Games, protesting the Soviet's invasion of Afghanistan. Whilst researching for my conversation with Rolando, I discovered that (his) Team USA participated in exhibition games - dubbed the 'Gold Medal Series' - against teams of NBA stars, culminating in a match-up against the 1976, gold medal-winning U.S. Olympians. Rolando reflects on the trials, the exhibitions that followed and the moment he realized he was one of the nation's elite players.

As a senior at Kansas State, Rolando's buzzer-beating, second-round heroics, helped advance his Wildcats, deep into the NCAA Tournament - ultimately making a trip to the 1981 Elite Eight. It's widely agreed that his game-winner versus Oregon State - along with U.S. Reed and John Smith's same-day buzzer beaters - solidified the term, 'March Madness'.

We discuss the 1981 Draft. Rolando was a first-round selection. He shares a fantastic draft-day story about fellow-1980 Olympian and future (Dallas) teammate, Mark Aguirre.

Rolando joined the expansion Dallas Mavericks, after just their first season in the NBA. They went 15-67 before he entered the scene. The team improved markedly in his first-two seasons with the Mavericks. He talks about the transition from being a college standout, to steering a fledgling team in the NBA, plus much more.